Global cinema is a competition of popularity and prestige – it’s common knowledge that Hollywood and European films usually take the crown for both. Go further East however, and you’ll find an exciting scene that has emerged in Philippine cinema, evolving from the box-office norm of poorly made slapstick and romantic comedies.

Still, that hasn’t stopped the rise of an independent film movement, in part due to easier access to digital filmmaking tools, and the launch of government or privately-funded festivals (such as Cinemalaya, CineFilipino, and Cinema One Originals). International acclaim has helped as well, with Brillante Mendoza and Lav Diaz arguably being two of the most prolific directors as of date. Winning awards from Cannes to Venice, and elsewhere, take a look at how these two men have helped put the Philippine film industry on the global map.

“I like to make movies based on real life stories that depict the Philippines.” – Brillante Mendoza on the common themes found in his films.

Born and raised in San Fernando, in the province of Pampanga, Brillante Mendoza originally had a different career path in mind before becoming a filmmaker. Missing the entrance exam for his university’s Psychology program, he eventually took up Advertising at the University of Santo Tomas in Manila.

“I arrived late for the B.S. Psychology entrance exam so I was not able to take it. At that time, only the slots for Advertising were available,” he tells Tomasino Magazine, the university’s official publication.

Mendoza then ventured into filmmaking first as a production designer, starting in the 1986 film Private Show, along with a series of works in TV commercials. Credited by his nickname Dante Mendoza, he continues this role in much of his body of work, with his latest production design credit in his 2015 film Taklub, a drama set in the aftermath of the monstrous Typhoon Haiyan.

It wasn’t until 2005 that he made his directorial debut with The Masseur, a drama about a young man who gives massages to gay men in Manila. Winning the video competition prize at the Locarno International Film Festival, this would be the first among his many accolades.

Mendoza made his first foray into the Cannes Film Festival in 2008, with his drama Serbis (Service). Nominated for the prestigious Palme D’Or, it tells the story of Flor, the owner of a pornographic cinema in Angeles City in Pampanga.

His breakthrough in Cannes however, came a year later – being the first Filipino winner of the elusive Best Director award for the crime drama Kinatay (Butchered).

His cinematic depictions of the ordinary Filipino reality continued, with the 2009 Golden Lion-nominated film Grandmother, the 2012 hostage thriller Captive (which starred Oscar-nominated actress Isabelle Huppert), the 2012 family drama Thy Womb, and the 2015 disaster-themed Taklub (also screened in Cannes).

His latest work, the 2016 crime film Ma’Rosa continued his prominence in the same French city. With lead Jaclyn Jose winning Best Actress, it was the first time a Filipino woman received the coveted award, alongside past winners Meryl Streep, Helen Mirren, and Maggie Cheung.

Recently, Mendoza has been involved in a number of high-profile local projects. This includes directing the first two annual State of The Nation Addresses of President Rodrigo Duterte, and his 2017 television anthology Brillante Mendoza Presents. 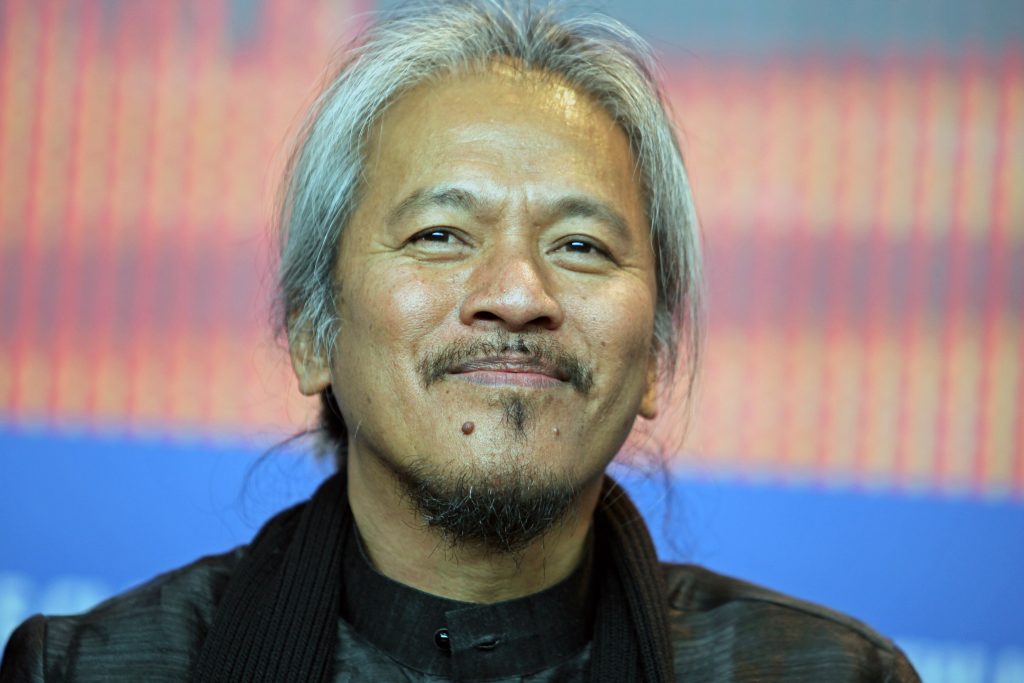 Hailing from the town of Datu Paglas, in the southern province of Maguindanao, Lavrente “Lav” Indico Diaz was raised by two teachers who were dedicated to schooling the poor in the province’s most remote villages. Their intellectual and Socialist backgrounds instilled in him the idea of art being a utilitarian form of culture, reflecting both society’s questions and answers.

Diaz, however, first took up economics at the University of Notre Dame, in nearby Cotabato City. Eventually, his first film venture would come as a screenwriter, in the 1991 film Mabuting Kaibigan, Masamang Kaaway (Good Friend, Bad Enemy), then credited as Laurente Diaz.

“The novelistic attribute of my work is very much like the Russian way of creating novels. Tolstoy, Dostoyevsky – their work has so many gaps. But for the reader, you cannot erase those gaps because they are important. They contextualize the whole struggle. My cinema is like that.” – Diaz on his body of work, often characterized as “slow cinema”.

A proponent of the slow cinema movement, Lav Diaz’s films, have an admittedly laidback pace. Yet this is countered by the themes of his plots and characters, having an emotional intensity that spans the dark eras of Philippine history.

It did however, prove difficult at first to finance these high-concept projects. Working as a screenwriter, he had to fund his personal works by penning action and comedy scripts for mainstream studios. This allowed him to work independently on personal projects, such as Ebolusyon ni Ray Gallardo (The Evolution of Ray Gallardo), and Batang West Side.

Two films in 1999 would soon follow, including the critically panned youth film Burger Boys, and the drama Hubad Sa Ilalim ng Buwan, (Naked Under The Moon). Two years later, Diaz would produce what arguably was his breakthrough film, Batang West Side.

Batang West Side is a mesmerizing, five-hour detective story that follows a Jersey City cop piecing together the events leading to the death of a Filipino-American murdered on West Side Avenue. Inspired by classic detective stories such as Oedipus Rex and Kiss Me Deadly, it would go on to win major Philippine awards, such as Best Picture, Best Direction, and Best Screenplay for the Gawad Urian Awards. Internationally, Batang West Side would also win Best Picture at the Singapore International Film Festival.

What would follow are 2 films related to the iron-fisted Martial Law rule of President Ferdinand Marcos. The first would be the dystopian sci-fi Hesus Rebolusyonaryo (Jesus the Revolutionary), a commentary on the crime and political crises of the Philippines in 2002. With no money for sets or even crowd extras, Diaz would use these constraints to emphasize that the country in the future will more or less look the same, or maybe even worse.

His next film, Ebolusyon Ng Pamilyang Pilipino (The Evolution of the Filipino Family), was released in 2004 after a 10-year filming period from 1994. It tells the story of 2 families of rice farmers, spanning a time period of 1971 to 1987, examining the effects of the Marcos regime on the rural underclass. Running 593 minutes long, it also ranks among the longest films of all time.

Diaz would continue his internationally acclaimed films with the 2008 drama Melancholia, winning the Horizons prize at the 65th Venice International Film Festival. A story about victims of summary executions, it would follow the journey of three people undergoing a strange form of therapy to escape their agonies.

Five years later in 2013, Diaz would release another regarded Martial Law-themed drama, Norte, Hangganan ng Kasaysayan (Norte, The End of History). It is a careful rethinking of Fyodor Dostoyesky’s Crime and Punishment, telling the tale of family man framed for a brutal double murder, and his wife and children escaping to the countryside to find a sense of redemption. It would be the first time Diaz would compete in the Cannes Film Festival, under the Un Certain Regard Category, as well as receiving aa Best Foreign Film nomination in the 2015 Independent Spirit Awards. Locally, it would also win Best Picture at the Gawad Urian Awards.

His penchant for rural dramas would continue in 2014, with his film Mula Sa Kung Ano Ang Noon (From What Is Before). Following the story of a remote town in the 1970s, it would eventually win the acclaimed Golden Leopard at the 2014 Locarno International Film Festival in Switzerland.

Berlin would then come calling in 2016. Releasing the 8-hour historical fantasy Hele Sa Hiwagang Hapis (A Lullaby To the Sorrowful Mystery), it would win the Alfred Bauer Prize, or the Silver Bear at the 66th Berlin International Film Festival. Jury head, and Oscar-winning actress Meryl Streep was all praises for the epic.

According to Diaz, “She was telling me that while watching the film, she thought of the old days of watching cinema where they had the patience… time….that it was very, very nostalgic and sad. She loved the film. And she wants to watch it again in the U.S.”

What would come next however, would arguably be his most high-profile work to date, the 2016 revenge drama Ang Babaeng Humayo (The Woman Who Left). This four-hour film, completely shot in black and white, details the story about the absurdity of human existence, weaving the themes of moral accountability, kidnappings, transgenderism, and poverty in a slow-paced yet thrilling feature. The film follows a wrongly convicted schoolteacher, recently released from prison plotting retribution against a former lover from a powerful political family.

Inspired by the Leo Tolstoy short story God Sees The Truth, But Waits, the film would garner the highest award, the Golden Lion, in the 2016 Venice International Film Festival.

As of writing, Diaz is currently working on his first foray into musical film, with the rock opera Ang Panahon ng Halimaw (The Season of the Devil). With the project in post-production, cinephiles and curious viewers can expect to see “an anti-musical musical, a rock opera, whatever you want to call it,” according to producer Bianca Balbuena. To be released in 2018, this project will surely drum up much publicity for the internationally-acclaimed director.

Welcome to Humaling, an arts and culture blog that aims to spread awareness on the amazing aspects of Philippine culture. From food, to film, to festivals, it showcases the beauty and diversity Filipinos have to offer to the world.

Buy me a coffee
Type to search or hit ESC to close
See all results
Loading Comments...